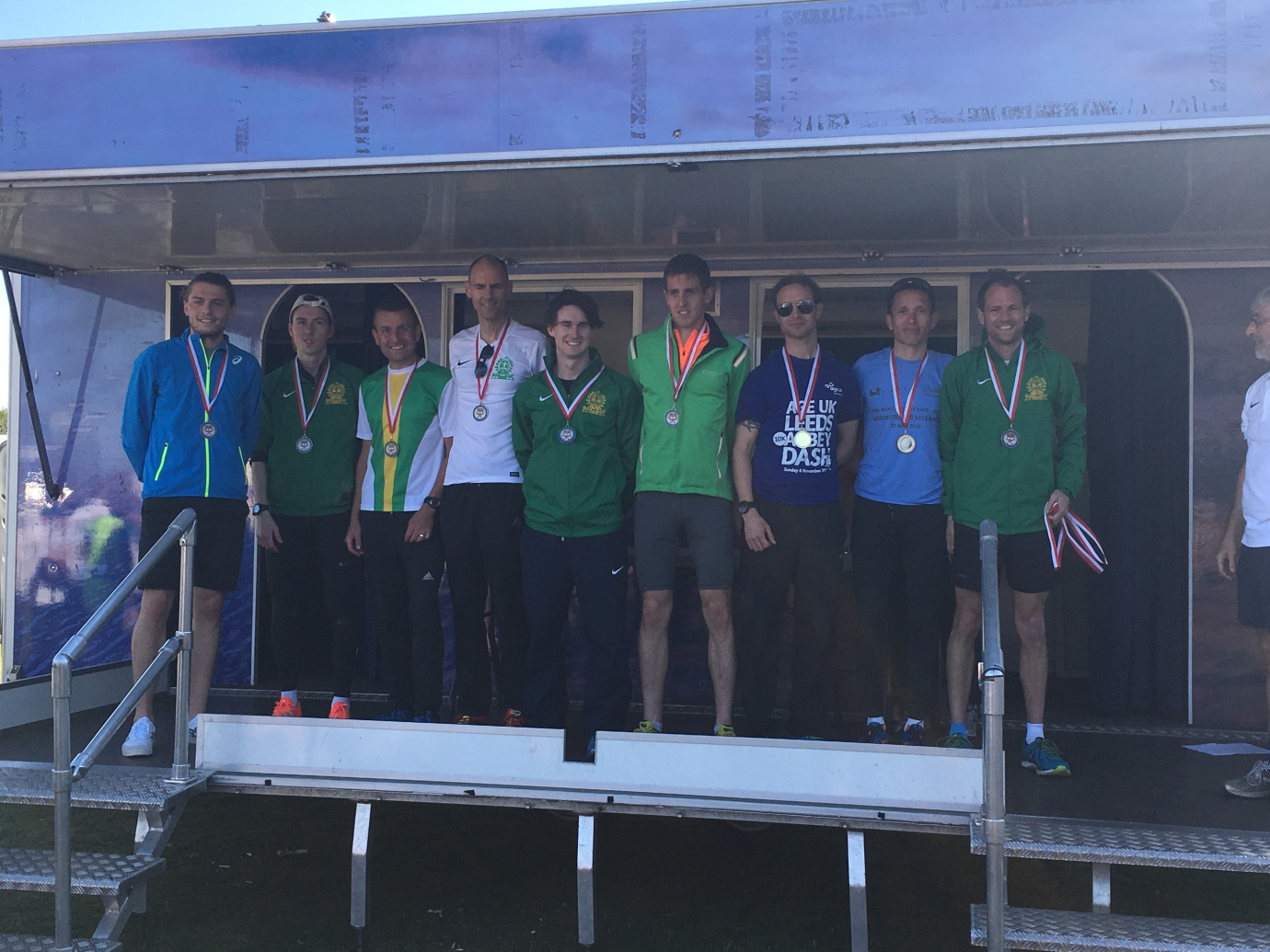 The 12 Stage relays are some of my favourite races of the year, & this year was no exception with a close (& fast) battle with Bristol & Cheltenham at the Midland relays at the end of March followed a fortnight later by an unexpected (before the day & even at the finish) medal at the National relays.

Although missing a couple of regulars from our relay team in Jonny Thewlis & Tim Hartley we looked to have a solid team & definite potential for the win. Competition was expected from last year’s winners Cheltenham & Bristol – & so it turned out!

By the end of the 4th & last long leg (my leg) it was a three way battle for the win & already looked like the medals would be between the same three clubs.

I took over in 3rd & held position although lost a few seconds on both Bristol & Cheltenham! The nature of the course at Sutton Park means anything more than a minute gets you out of sight of your chaser for the majority of the run which can make for a tough & lonely time trial at the Midlands especially. Knowing I was still chasing fitness I didn’t go out too hard as I knew it would likely result in my ‘blowing up’ by halfway – I learned that lesson at the National last year!

That said I didn’t hang around & by the top of the hill felt like I was moving reasonably well. Onto the out & back that makes up the extra distance of the long leg & time to maintain focus with this being the loneliest part of the course where time can easily be lost.

I could see at the turnaround point that I wasn’t making any impression on the two in front but felt I was holding the gap (just about).

Off the top & the long downhill stretch to the pond. There’s only about 5 minutes of running from here so no excuse not to put everything in. The early part of steep enough downhill to get some ‘free’ speed but other than that you still need the legs to make the most of the favourable gradient. The crowds pick up again with 1K to go & on reaching the pond there was a descent level of excitement from the Notts supporters so I could tell we were still in touch.

Up the last nasty kick-up into the woods, before the final drag up to the line. Not much of a sprint to the finish but it was all I had & handed over for the remaining 8 short legs to see if we could move through.

Move through we did – eventually! Bristol led from the 2nd leg & held that position throughout except a minor blip on leg 6. We eventually came past Cheltenham on leg 9 but by that point we were exactly 2 minutes down on Bristol & any thoughts of overhauling them were drifting away. The closest we got was 70 seconds, but with times >5 minutes faster overall than the previous year’s on the same course there were no (few) complaints from us with silver. My own time held up well on the day, finishing 9th fastest of the long legs which was a pleasant surprise given how I had felt. 27:12 was a fair bit faster than last year!

Still missing Jonny, & a straight swap in for Tim meant we (I?) weren’t heading to this race with high expectations. Top 10, possibly top 6 if we all ran slightly better than the Midlands but certainly not expecting to be in contention for the medals.

Fortunately through some vast improvements from a fortnight previous, half of the distance running community seemingly training at altitude & a phenomenal leg 4 (short) from Doug Musson we got ourselves in the mix from an early stage!

This time it was the scrap that is leg 1 for me! 60+ men with fresh legs & testosterone aplenty with ~20 of those wanting their toe on the start line to do battle for the first corner after the sharp downhill start. I’ve enjoyed leg one before at both the Midlands & National so I knew what to expect, although the two races are VERY different. The Midlands is reasonably comfortable to get to the front & it’s then a decision to take it on from the front or sit in with one or two others to make a move from the stone. The calibre of runners at the National means there’s not much need for a similar decision for somebody at my level – there is always somebody to follow!

It was definitely a year for sharp elbows & it felt very congested throughout the first mile where the path is particularly rough & narrow. There were a few near misses right from the gun, catching heels in front & constantly being clipped from behind!

Back out from the dog-leg start & I was just at the back of a large lead group of ~20 runners with only a 1-2 second gap off the front to Clowes (Cardiff) & Taylor (Morpeth). I hadn’t felt great warming up, & with a particularly sore left quad from Thursday’s session I was struggling to go with the increase in pace. Fortunately for me the group quickly disbursed into a more focussed dozen or so & a couple of stragglers with me.

With relatively little wind at the top of the hill three of us held the gap reasonably to the large pack in front & kept them in sight passed the Jamboree stone to the turnaround point. I was definitely starting to blow by this point but with a couple of runners coming back to me & seeing a constant flow of runners behind made it easier to dig in & maintain my pace.

I ran well off the top of the hill back at the stone & made up good ground on Swansea & Hillingdon in front, closing to within 3 seconds at the finish having been ~15 seconds down at one stage. The sun had came out & so had the crowds with massive support at the stone & all the way from there, passed the pond & onto the finish.

I had managed to get a small gap to a handful of runners behind & maintained that to the finish with a reasonable kick up to the finish – for me at least! Unfortunately for me the Hillingdon runner caught Swansea just before they turned for home which seemed to perk him up to muster a strong finish as he was coming back to me at a reasonable rate & I expected to catch him just before the line. It wasn’t to be & I came in 11th, so no mention in this week’s Athletic’s Weekly for me! Still I was sure I had ran faster than at the Midlands & I was right, coming in with 26:50 so a 22 second improvement off a heavier training load. Importantly I was less than a minute off the pace which meant we were in the race from the start.

Swansea & Cardiff were away & clear from the early stages & although Cardiff would fade away badly from Dewi Griffiths’ blistering fastest long leg of 25:10 on leg 5 the winner never looked in doubt. Behind though it was a different story with various teams coming into the mix. Bristol looked strong again, Bedford, Tonbridge, Kent & Liverpool all remained within striking distance of the medals. We were never lower than 5th after leg 4, & were briefly into 3rd after leg 10. An impressive 25:47 from Jonny Mellor brought Liverpool through the 2nd & dropped us back to 4th – the worst position to be in! With just Tim’s final short leg to come & exactly a minute down on Bristol in 3rd it looked likely we would miss out on a medal & spend the rest of the weekend mulling over the ‘what if’s’. Close but no cigar, made slightly more palatable  given the low expectations we had entered the race with.

But there was to be a final twist! With a strange quirky rule regarding the invited Welsh & Scottish clubs, Swansea would be presented with the impressive trophy & UK winners medals. Bristol would get English gold, Liverpool silver & Notts AC bronze. A great result illustrating the strength in depth we have in our distance squad! Personally I was happy with how my time stacked up on the day. I had wanted to be around 10 second quicker but given I have previously found leg 1 to be hard to run fast (more tactical than the other legs & particularly tough in the first mile where there is nowhere to run!) & I overcooked Thursday’s session I was definitely happy when we got home!

Another national medal to add to the growing collection & continued optimism that we will pick up that trophy at some point before I start slowing down.